Here we share our recent adventures with those creatures that our amazing creator made and that we call REPTILES!

Last Monday afternoon I had to go and check on our new chicks and I found an Eastern King Snake in a laying box with an egg in his mouth. I went down to the house told the boys and of course they wanted to see it. I told them lets give it a little while so he will have that egg in really good so that it wouldn’t be able to bite me when I picked it up BUT when we went up I found out I gave it too much time because he had that egg all the way in and had started on a second egg. I took a couple of pictures of it laying there. I put my gloves on because I can’t stand the way they feel and I reached down and picked him up. We snapped another picture or two and then I carried him towards the back of our pasture. Half way there one egg came out and he turned his head and it seemed he tried to strike. I put my fingers right over his mouth holding it shut and starting walking even faster. He was wrapping his back-end around my arm and I was like “ooohhh, oooohhh I can’t stand that”. My oldest said “Mom, your acting like a girl” and I said “I am a girl” =) We got to the back of the pasture and I put him over the fence being pretty sure that we will see him again.

So later in the week we decided to do a Reptile Nature Study that was suggested by Barb at the HNS blog.

We started off by both boys picking whatever Reptile they wanted to learn about and sketch in their creation journal. My oldest picked a King Cobra because we just got finished reading the short story called Rikki-Tikki Tavi by Kipling for the third or fourth time. The boys just love this story!!!! My youngest picked the Eastern Kingsnake since that is what we had just found in our barn. We read about each snake and then they sketched them. We also talked about and looked at images of lots of other reptiles.

Later in the day we were reading from our favorite Nature Magazine: Nature Friend and we laughed about the story we had already read where a Brown Thrasher was seen whooping up on a snake. The boys (and I) just thought that was awesome!! Go Brown Thrasher, GO!!! 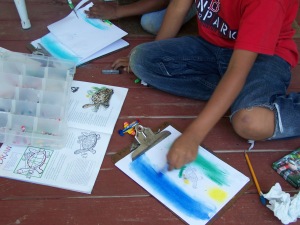 In the Nature Friend Mag. they had a drawing lesson for drawing a turtle (yea another reptile). They used our new soft pastels for only the second time. They have really enjoyed using the pastels. The boys and I prefer the soft over the acrylic ones. If you and your kids have never tried them, I encourage  to do so. Go to the two links below for great information, tutorials and lessons for Pastels.

Later we went for a Creation walk actively looking for snakes and bird nest. We were inspired to look for nest because my youngest had just found a Cardinals nest with three eggs in it up in our pasture near our barn.  So while on our walk we found two places where there was evidence of a predator attacking and devouring his prey. One area had lots of black feathers and we even found the top and bottom of the beak (very cool), the other area had lots of Blue bird feather but this time we didn’t find any body parts. We came across a wee little snapping turtle (yea another reptile). It was so cute and we got to see it snap and hold onto a little stick a time or two.  We looked around rocks, in old tree stumps, near logs, around our lake, in the grass and near a creek but we never saw a snake. Which was a little disappointing and yet also a relief =) That evening while I was cooking my oldest read two small articles in a Reptile Zoobooks magazine and shared them with me! So far this summer we have only seen three snakes; one in our barn, one at the lake and one on our drive way right outside our basement Though daily we anticipate seeing a snake in our barn trying to get out eggs.

This was what my youngest sketched in his journal………….it is me running from a snake and him saving mm by shooting the snake with a rifle!!

My oldest sketched a King Cobra and wrote one fact about it in his journal.

Today we also reminisced about our sighting of two huge snapping turtles mating in our lake. It was so funny cause at first the boys thought they were fighting but then they pretty quickly figured it out.